Bhuwan Chauhan is an IFBB professional bodybuilder, Fitness trainer, and social media influencer from India. He is the first citizen of India to win the IFBB Pro Show and qualify for Mr. Olympia 2022 in the Men’s Physique Division. Manoj Patil is also IFBB Pro show who played in men’s physique division from India.

Bhuwan has competed with Brandon Hendrickson and Erin Banks in a Pro Show. Bhuwan began competing in bodybuilding contests and has won numerous national and international championships to his name.

Bhuwan Chauhan was born on July 15, 1992, in New Delhi, India. Bhuwan was an intelligent student in his education. In 2011, he got a scholarship from the University of Alberta. In 2015, he completed his B. Tech from the University of Alberta. He got a job in an oil and gas company in Canada. Guru Mann said if anyone wins Mr. Olympia’s title in Men’s physique he is Bhuwan.

Bhuwan started participating in bodybuilding contests in 2016. Here is a list of some of the major championships he has won.

According to some reliable resources, the famous Bodybuilder Bhuwan Chauhan’s net worth is $1 to 5 million at the age of 29. He earned all his money to be a professional bodybuilder.

To stay fit and active, Bhuwan Chauhan has to have an excellent diet. This means, that no junk food, no sugars, and no alcohol are allowed when he’s training for the show. Bhuwan said to get six-pack abs you have to clean diet and regular abs exercise 2-3 times a week.

Yes, Bhuwan Chauhan is an Indian to win the IFBB Pro show, and he is the first Indian to qualify for Mr. Olympia in Men’s Physique Division.

Where Does Bhuwan Chauhan Live?

Who is Brandon Hendrickson?

Brandon Hendrickson is an IFBB professional bodybuilder in the Men’s Physique Division. He has continued his control competing at events like the New York Pro, Arnold Classic, and Mr. Olympia, among other special events from 2013.

Why is Insurance Necessary for a Professional Athlete? 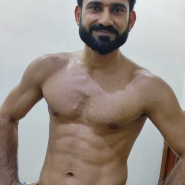 I am Tikkay Khan a trainer and fitness model. As a professional, I am a fitness guy but I also work in I.T. I run my health blog and do work as a trainer for different people in the fitness industry.